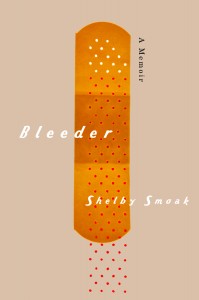 A coming-of-age story for the modern age, Bleeder is the incredibly compelling tale of author Shelby Smoak. A hemophiliac, Smoak discovered he’d been infected with HIV during a blood transfusion at the start of his college career. This devastating and destabilizing news led Smoak to see his world from an entirely new perspective, one in which life-threatening illness was perpetually just around the corner. Set in the 1990s

along the North Carolina coast, Bleeder traces Smoak’s quest for love in a world that feels increasingly dangerous, and despite a future that feels increasingly uncertain. From the bedroom to the operating room, and from one hospital to the next, Smoak seeks out hope and better health. Winner of a PEN American Center award for writers living with HIV, whose work has appeared in numerous journals and magazines, Smoak constructs this unforgettable story of life and love against terrific odds in breathtaking, tightly drawn prose.