This is my letter to you.  Thanks being interested in Bleeder, the band and/or the book.  Since I can remember, I’ve yearned to be a musician, a writer.  In fact, I never really imagined much else for myself.  While many separate the two art forms, I’ve always seen them as kindred spirits, each an expression of the raw emotion of living with hemophilia and HIV.
If you have hemophilia and/or suffer from HIV, I hope you might shed that sense of isolation such illnesses herald in and may gain from Bleeder a feeling of a shared struggle.  If you are just coming to understand the plight of the hemophiliac or the duress of being HIV-positive, I hope you might not simply come to empathize with those of us living with these conditions, but see Bleeder as a project of hope and survival.  Ultimately, if you enjoy the work—its sound, its story, its message—I hope you might turn to a friend and say simply:  “Here’s a good song; here’s a true story. Listen to it. Read it.”  That is the greatest compliment any artist could receive.
I thank you for your time, interest, and support.

Shelby Smoak’s poetry, fiction, and nonfiction have appeared in journals and magazines such as Northern Virginia Review, Clues, Cucalorus, Juice, The Crutch, New Thought Journal, Cities and Roads, and Coastal Plains Poetry.  After a long tenure in higher education, teaching literature and writing, Smoak now works in healthcare policy and advocacy. He has been a musician in bands North Elementary, Simple, Dos Ninjas, and Bleeder. He lives in the Shenandoah Mountains with his wife, Vicky Hawk. 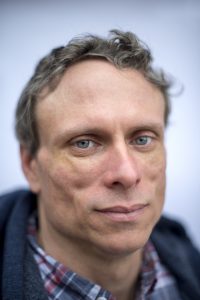